On April 17 a diverse bipartisan group of civil rights, advocacy, and business organizations, including CCRC, sent a letter to Treasury Secretary Mnuchin and SBA Administrator Carranza expressing concern over the restrictions imposed by the SBA on people with a record of arrest or conviction under two programs recently authorized by Congress in response to the COVID-19 crisis.  The letter points out that these unwarranted restrictions on loan programs intended to aid small businesses and non-profits will have a significant and detrimental impact in communities across the country, and a particularly harsh effect on minority business owners and employees who are disproportionately affected by the criminal legal system as a result of institutional discrimination.  It urges that federal relief be made equitably accessible to all who need it.

In conclusion, the letter urges the SBA to take the following steps:

An Appendix to the letter describes how the new rules and policies governing the Payroll Protection Program are more restrictive than those governing the 7(a) program generally, and how barriers based on arrest or conviction may also disqualify people with any sort of a record from loans under the EIDL program authorized under the SBA’s existing 7(b) disaster loan program.

The letter —available in PDF and reprinted below – was sent by the following organizations:

END_OF_DOCUMENT_TOKEN_TO_BE_REPLACED

Prosecutors’ role in deciding how long people stay in prison

A timely new article from CCRC board member Nora V. Demleitner, law professor at Washington and Lee University, considers the central role of prosecutors in determining who goes to jail and prison and how long they stay there.  Demleitner reviews—as a “case study of prosecutorial authority”—prosecutors’ actions to reduce confined populations during the COVID-19 crisis.  While prosecutors’ key role in charging and sentencing at the front end of a criminal case is well-established, in ordinary times their influence in its later stages, including in prison release decisions, is not so obvious.  Professor Demleitner shows how the pandemic “highlights the tools prosecutors have at their disposal and how they can directly impact the size of the criminal justice system.”  This in turn leads her to consider how “prosecutorial thinking” focused on public safety as opposed to public health “increasingly influences other branches of government” even in the midst of a pandemic.

Professor Demleitner’s article, “State Prosecutors at the Center of Mass Imprisonment and Criminal Justice Reform,” will be published in the April 2020 issue of the Federal Sentencing Reporter.  The abstract is included below:

END_OF_DOCUMENT_TOKEN_TO_BE_REPLACED

A bipartisan group of civil rights, advocacy, and business organizations, including CCRC, are calling on Congress to take immediate action to remove barriers based on arrest or conviction history for small business owners seeking COVID-19 federal relief.  This is an issue we have been covering in depth in recent posts.  This call to action—available in PDF and reprinted below—is issued by the following organizations (with additional sign-ons welcome; contact us here):

END_OF_DOCUMENT_TOKEN_TO_BE_REPLACED

*UPDATE (5/6/20):  We have a new article about a purported leak of the SBA’s internal guidance for denying disaster loan (EIDL) relief based on a record.

The U.S. Small Business Administration (SBA) oversees an array of government-backed loans that are key resources for small businesses fighting to survive during this pandemic.  The recently-enacted stimulus bill authorized more than $300 billion in new SBA loans, many of which are eligible for forgiveness.  We published a post about this on March 27: “Applying for an SBA loan with a criminal record.”  But in the past week, the SBA has issued confusing and frequently changing guidance regarding stimulus loan eligibility for people with a criminal record, a group that includes as many as one in three adults.  In the last week, the SBA has issued criminal history guidance for the Paycheck Protection Program on three separate occasions, each time with more restrictive eligibility rules, and it is not clear when guidance will be finalized.

The most recent guidance, issued just today, disqualifies from financial assistance a business with: 1) an owner of 20% or more of the equity who is currently subject to criminal charges, incarceration, probation, or parole; or 2) “any owner” who has, in the last five years, been convicted of any felony, or pled guilty or nolo contendere to felony charges, or been placed on pretrial diversion or any form of parole or probation, including probation before judgement, based on felony charges.

These developments are troubling given the urgent need for relief and the considerable barriers that people with records already face in the economy even in the best of times.  In this post we discuss the past week’s developments on this issue.  We also provide information about COVID-19 disaster loans.

END_OF_DOCUMENT_TOKEN_TO_BE_REPLACED

Will restrictions on banking jobs be relaxed for people with a record?

More than two dozen organizations dedicated to improving employment opportunities for people with a criminal record have written to the FDIC urging that it give regulated financial institutions greater latitude to hire qualified people without having to ask the FDIC’s permission.  The occasion is the FDIC’s proposal to reduce to a formal rule its longstanding policy on employment of convicted individuals by banks, a proposal that suggests the FDIC may be open to giving banks more hiring autonomy by relaxing several controversial provisions.  For 20 years, the FDIC has kept a tight grip on banks, requiring them to obtain a waiver before they may hire anyone with a record even in an entry-level non-professional position.  In operation, this policy has been an effective bar to bank employment for most people with a conviction record (and even for some who have never been convicted).

The letter, organized by the National Employment Law Project and the Leadership Conference on Civil and Human Rights, points out that FDIC’s exclusionary policy is not required by its enabling statute, and urges the agency to bring its policy on hiring waivers into line with national efforts to further reintegration, in several different ways, some of which are discussed below.  The letter cites the bipartisan federal Fair Chance Act and corresponding reforms in states across the country (as reported by CCRC), as well as many letters from bank industry leaders urging the FDIC to relax its rigid policy that has frustrated efforts to diversify the financial sector’s work force.

The comment below provides some background for the FDIC’s proposal, and comments on where some relaxation of its present policy is likely.  It concludes with a note about the generally confusing and inconsistent treatment of state relief mechanisms like expungement and pardon in federal laws and regulations, suggesting that this is an area sorely in need of further study and proposals for reform.

END_OF_DOCUMENT_TOKEN_TO_BE_REPLACED

We are pleased to publish our annual report on criminal record reforms enacted during the past calendar year.  This is the fourth in a series of reports since 2016 on new laws aimed at avoiding or mitigating the collateral consequences of arrest and conviction.  This year we have included for the first time a Report Card grading the progress of the most (and least) productive state legislatures in 2019.  The press release accompanying the report is reprinted below: 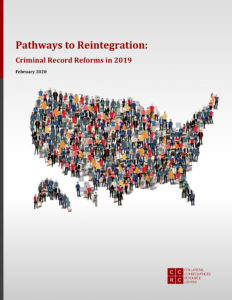 Washington, D.C. — The Collateral Consequences Resource Center (CCRC) has released a new report documenting the astonishing number of laws passed in 2019 aimed at promoting reintegration for individuals with a criminal record.  Last year, 43 states, the District of Columbia, and the federal government enacted an extraordinary 153 laws to provide criminal record relief or to alleviate the collateral consequences of arrest and conviction, consequences that may otherwise last a lifetime and frequently have little or no public safety rationale.

“This report is our first to include a Report Card on how state legislatures performed during the year in advancing the goals of reintegration,” said CCRC Executive Director Margaret Love. “We wanted to recognize New Jersey as Reintegration Champion for having the most consequential legislative record in 2019, including three important new laws authorizing ‘clean slate’ record relief, restoring voting rights, and curbing driver’s license suspensions.”